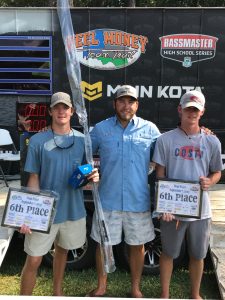 Mt. Bethel Christian Academy is building quite a name for itself around the Bassmasters’ world as Brooks Anderson and David Britt placed sixth at GABassnation tournament at Lake West Point this weekend. With this sixth-place finish, Mt. Bethel now qualifies for its fifth-straight Georgia State Championship that will be held at Lake Lanier in June 2020.

MBCA competed against 167 high school teams from across Georgia this weekend and battled 8-hour days in 95-degree weather to take home the sixth-place honor.

Bass Fishing is now a main-stay program in most christian schools and universities around the nation.

Bethel University is considered the Harvard of bass fishing.

Thanks to the efforts of Anderson and Britt, seems Mt. Bethel is the same in the high school world.