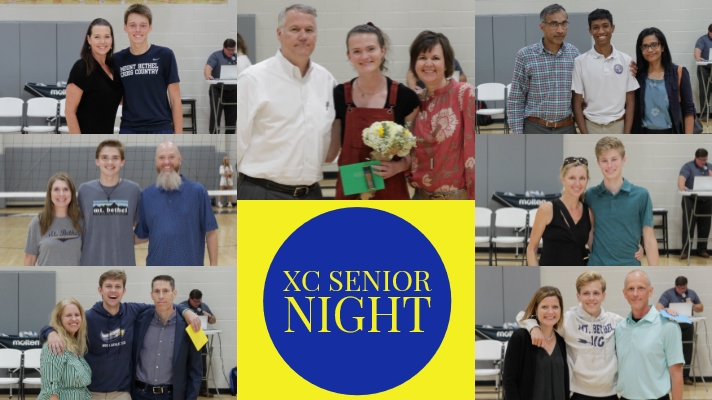 The Mt. Bethel Cross Country family honored seven amazing seniors during the Senior Night events at The U on Monday, September 30.

They were each recognized individually for their long list of achievements on and off the course; including a few who have been at Mt. Bethel Christian Academy since they were in Pre-K and Kindergarten.

The Magnificent Seven honored for their XC excellence were:

“I have thoroughly enjoyed watching these runners develop,” Head XC Coach Trent Jones said. “Beau, Ethan, Sterling, and Ajay were a part of the Region Championship team and the second-place and third-place GICAA State teams. They have pushed themselves to improve against tougher competition in GHSA. Robbie and Will have been a great addition to help us compete! They all have done so much to help us build this program.”

“Gracie has been our everything on the girl’s squad,” Jones added on the lone senior on the ladies squad. “She has been there helping push the boys as a freshman and sophomore and added the goal of leadership as we have built our girls team. I think she will take our school-record mark of 23:49 in the 5K before the season ends.”

Thank you, seniors, for your effort and dedication to Mt. Bethel!