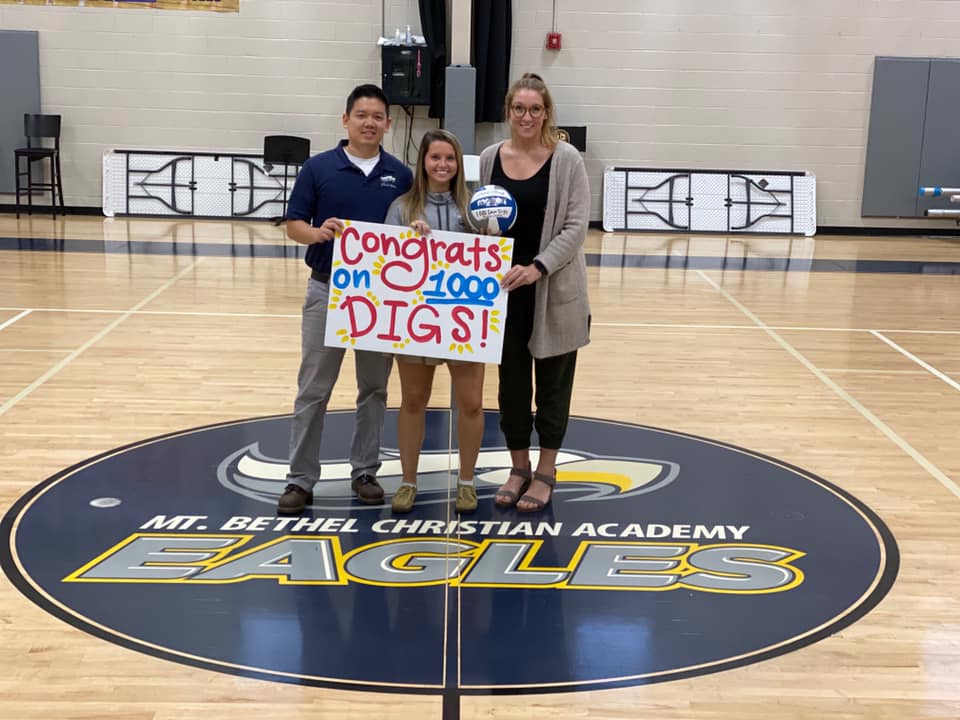 There is no doubt it’s been quite a four-year run for Mt. Bethel Christian Academy Senior Libero Payton Lackey.

For a player with a start-up team at a start-up school, it would have been easy to just have some fun, win a few matches, and collect a few extra Varsity Letters along the way.

But, that was far from what Lackey envisioned and dreamed about as she took that leap to high school at Mt. Bethel in 2016. Lackey wanted to create something special along with her teammates. Fast forward to 2019, and it’s clear she has definitely experienced a great deal of success alongside her teammates. The success that even players and teams at long-established programs around the state are envious of.

In her time with the Eagles, Lackey has won a GICAA Title, been a runner-up in the GICAA, won Region Titles and has played in the State Tournament all four years.

This past week, Lackey was recognized as All-Region/Area by the coaches of GHSA 6A on Thursday at the 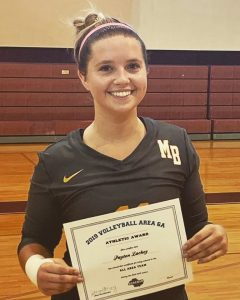 Region Tournament at The Walker School for her efforts this season.

But that wasn’t the only honor she collected that day.

During the Final Four Match with North Cobb Christian, Lackey collected and passed the 1000 Dig Mark for her career at Mt. Bethel.

“(Payton) Lackey is truly a warrior for her team,” Mt. Bethel Head Varsity Coach Ryan Burke said of her senior. “She’s fearless in her play and relentless with her desire to win and perform. Lackey brings this competitive edge to the court that cripples hitters. Her amazing stats continue to further prove her character and grit. Payton’s truly grown into an amazing player, teammate, student-athlete, and young woman. It was an incredible experience watching her on the sideline and I know her relentless attitude and faith will carry her to great places.”

She currently stands as the lone member of the “1000-1000 Defensive Club” as she has 1426 Serve Receptions and 1005 Digs in her career. Overall, Lackey is in the Top-10 in 7-of-the-10 All-Time Career Record Leaderboards for the Eagles. But if you ask her, she digs way more than digs when it comes to her goals.

“One of my big goals as a freshman was that I wanted to reach 1,000 digs before I graduate,” Lackey said of her 1000 Dig honor and career goals. ” It’s so great I got there! But, my main goal then was to help build a strong volleyball family within the program. I believe this goal has been met with the hard work of so many people. I am so proud of my teammates and how they have handled everything these last four years. From coaches to divisions, many things have changed. But, I have never once felt our bond as a team weaken. These girls will forever be my sisters and I wouldn’t want to sweat, cry, laugh, and celebrate with anyone else. I never would have gotten anywhere without them.”

Even though she might be humble and would like to downplay her achievements, Lackey has not only made her mark at MB but will leave with her name among the best to play in the region and state as well. Lackey is currently 14th in the State (All Classifications) and Fith in Region 6A in Digs with 480 for 2019.

And that’s just the beginning of what Lackey has been able to accomplish as she has put up quite the stat line that will be at the front and center of Mt. Bethel Volleyball for years to come.

“Payton is an incredible athlete,” said Rachel VanderPol (Lackey’s head coach at Mt. Bethel for three years and currently the Head Coach at GAC). “She works hard in everything she does. She strives not only to be the best she can but encourages and pushes all her teammates around her to constantly strive for excellence. She is a competitor through and through. I’m so happy for her and all she and her teams have accomplished!”

As you can see, there is way more than just a driven young lady focused on entering the records books. Stats and records were a bonus for her as one of our founding volleyball athletes. 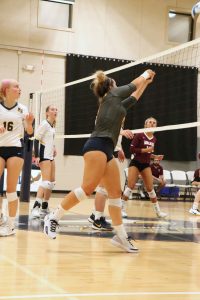 “My mindset during my Mt.Bethel career was that we might not always win, but it is about building a program and setting the tone for how we wanted this program to be,” Lackey added on her time and achievements with Mt. Bethel. “I wanted to be able to come back in 10 years and see an extremely successful program, both on and off the court, and say to myself ‘I helped build this and it was all worth it’. Of course, I will remember winning a state championship and region 2 years in a row, but I think the thing I will remember most about my time playing volleyball at Mt. Bethel would be the relationships I have built with my teammates and coaching staff. I wouldn’t be where I am today in life or in volleyball without my team and coaches. They have played a crucial role in my success on and off the court, and I don’t know what I would do without them.”

Lackey went on to repeat she can’t imagine doing any of this without her other seniors (Keegan Jones, Lauren Schwartz, Summer Smith, Karlee Jordan, Sara Grace Kimery) and the rest of her team. In fact, she said there is no way she could have realized any of her personal or team or program dreams without them.

Her personal totals are not set either as the Eagles will travel to Athens to battle Athens Academy Saturday at 10 AM in the First Round of the GHSA A State Tournament.

But each match now carries that extra burden of possibly being her and her fellow founding seniors last as an Eagle.

Whether that happens in the next week or so or on November 2 playing for another State Championship, Mt. Bethel will always remember the Founding Six led by their Libero who was always willing to dig in and do the dirty work it took to push her, her teammates and this program over the top.