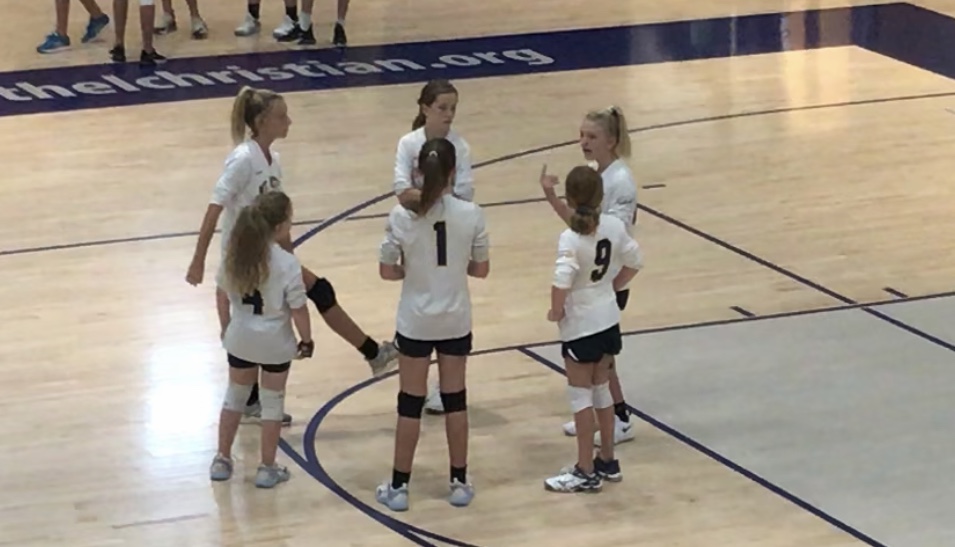 The Mt. Bethel B volleyball team looked to avenge their 2019 Metro 10 Championship loss as they hosted the Mount Vernon Mustangs on Tuesday afternoon. The Eagles proved successful in this endeavor with a 2-0 victory, which improved the team to 5-1 on the season.

Highlights can be seen here –

The starting lineup had a slightly different look as newcomer Charlie Weeks joined fellow sixth-grader Elizabeth Rogers, along with the team’s four seventh-graders. Weeks made the most of her opportunity to play and was a key contributor in the Eagles 25-18 first set victory. It was Mt. Bethel’s consistent serving that proved the difference maker against the Mustangs, just at it has against the Eagles last three opponents. Abby Garrett posted six straight points on serve, breaking an early 5-5 tie and giving the Eagles a commanding 11-6 lead that they would not relinquish.

Mt. Bethel stuck with their winning formula in the second set by keeping the pressure on the Mustangs through consistent serving and returning. This time it was Avery Calvert who broke the game open in the second set. Serving at 8-8, Calvert helped the Eagles to three straight points, capping her effort with an ace at 10-8. The Eagles would take an 11-8 lead and eventually close out the Mustangs 25-15.

MBCA looks to improve their record to 6-1 on the season when they host the St. Francis Knights on Thursday at 3:30.